Identity, Politics and the Jungian Connection 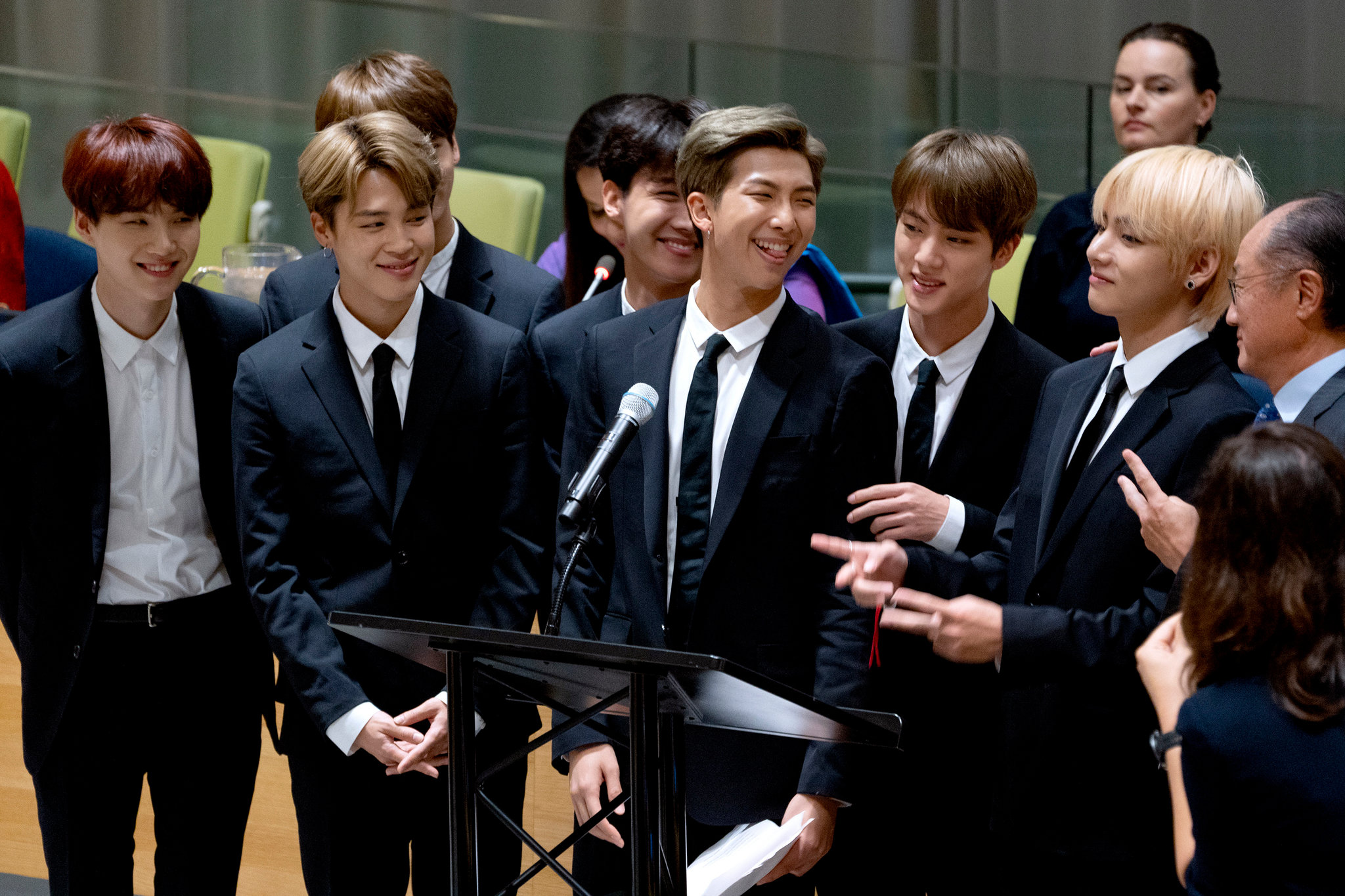 This article is part two in a series by guest contributor Amianon, focusing on the societal impact of the K-Pop boy band and worldwide sensation BTS.

So why all this fuss about Jung? Well, considering this series examines the MKUltra symbolism in BTS' work, the fact that they chose to base an entire album after Jungian philosophy is extremely pertinent. Jung had connections to Allen Dulles and the MKUltra project, and the Jungian process of individuation is heavily similar to the intentional splitting of the mind in the Dulles fashion. But they do not encourage fans to subscribe to this particular method of psychotherapy to the best of my knowledge; their concepts have only touched on these ideas for thematic purpose. If Jung had ill intentions and his psychology relates to BTS' message, (even if he is widely revered for the 'good' he did) that infers sinister intent in BTS' messages, which is highly concerning. They have massive influence among most notably college students (ages 18-24) as well as a minority of teens (16% to 27%) and adults (according to Reuters, a growing share of their audience are in their 40’s and older, which means they often have more disposable income). According to Brandwatch Audiences, adults in creative professions are more likely to engage with the band at 40%, then students at 26%, executives at 12% and health practitioners at 7%, (the remaining percentage undocumented). They're influencing a large part of their demographic people in a highly impressionable stage of life, and their moral compass and worldviews are laced in everything they do. Even watching entertainment-focused content by them such as their daily life may often seem like an invitation to the dinner-table political talk of a mismatched, highly-accomplished and philosophically literate family structure. 'A forced society is a bad society,' Namjoon remarks casually while washing dishes (In the Soop, 2020) after Hoseok tries and fails to gently rouse an exhausted Jimin, who'd stayed up late partying with Jungkook and had no pressing appointments or engagements the entire day. “Let him sleep, we'll save lunch for him.” They're not intentionally political, but their personal views cannot be divorced from their content, unless they maintain an intentionally neutral silence on certain topics to avoid offending their varied and diverse fanbase. And they oftentimes do maintain this stance, but not always; if a topic becomes so serious they feel compelled to do something, they will, as evidenced this year. After looking up, alarmed, to find the United States on fire, they perhaps rashly emptied their pockets of one million dollars in a donation towards Black Lives Matter. But in order to not offend, they aren't very vocal about politics besides occasionally dedicating songs towards these topics; Billboard says: 'the group litters millennial-oriented messages about societal woes throughout their discography,' including songs like 'No More Dream', 'Silver Spoon', as well as 'Am I Wrong' and, to an extent 'Spring Day.' Billboard adds: “The song [Am I Wrong] features Jimin and Jungkook singing about the entire world going crazy, and RM questioning how people don’t react strongly to the state of news and media in this day and age. The message of “Am I Wrong” proved to be prophetic, as Wings was released the same month that a multi-layered corruption scandal erupted that would eventually bring down then-South Korean President Park Geun Hye.” In light of this vaguely anti-governmental sentiment frequently reflected in their songs, I think it's reasonable to assume that the dedication of an entire album to a Jungian theme is purely a stylistic decision and not an endorsement of the sinister MKUltra government program's method of splitting the mind to weaponize it. Devil's advocate: this popularizes and launches a lot of dirty laundry into popular culture, exposing people to dangerous ideas. The response: if you bring to light an abhorrent institution in order to draw attention to how bad it is, are you romanticizing it or creating an added stigma towards those who espouse such values when you are staunchly against it? Food for thought. In conclusion, Jung's methods of dividing the mind ARE utilized by the Map of the Soul: 7 album, but not to weaponize. MOTS:7 diagnoses inner turmoil (Persona), contemplates the turmoil (Shadow) and resolves it (Ego.) The goal is to sort out a bunch of really complicated problems, solve them, and unite eventually into a solution. They do not, in any way, recommend the long-term division of the mind in order to let handlers weaponize and direct it. The members are the ones who compartmentalize each part and 'face' of themselves and not anyone else, as a coping mechanism; the album is primarily about the group's struggle dealing with their burgeoning fame. Being thrust into the spotlight is scary, even if you see it coming a long way off—there are a lot of eyes on you, all the time, and fame takes a toll on anyone, especially if you're worried about maintaining a spotless image. “I’m afraid, flying high is terrifying. No one told me how lonely it is up here,” Yoongi raps in 'Shadow.' “I rise, rise, I hate it/I pray, I pray, hoping to be okay.” Then he, in characteristic BTS fashion, challenges himself: “Wasn’t this the kind of thing you’d been wanting?/The life you hoped for, the life you wanted/The life you chose: you achieved everything without regrets/And on top of that, you have a big house, big cars, big rings/All the things you wanted, you’ve got it all/So what’s the problem? Just enjoy it.” 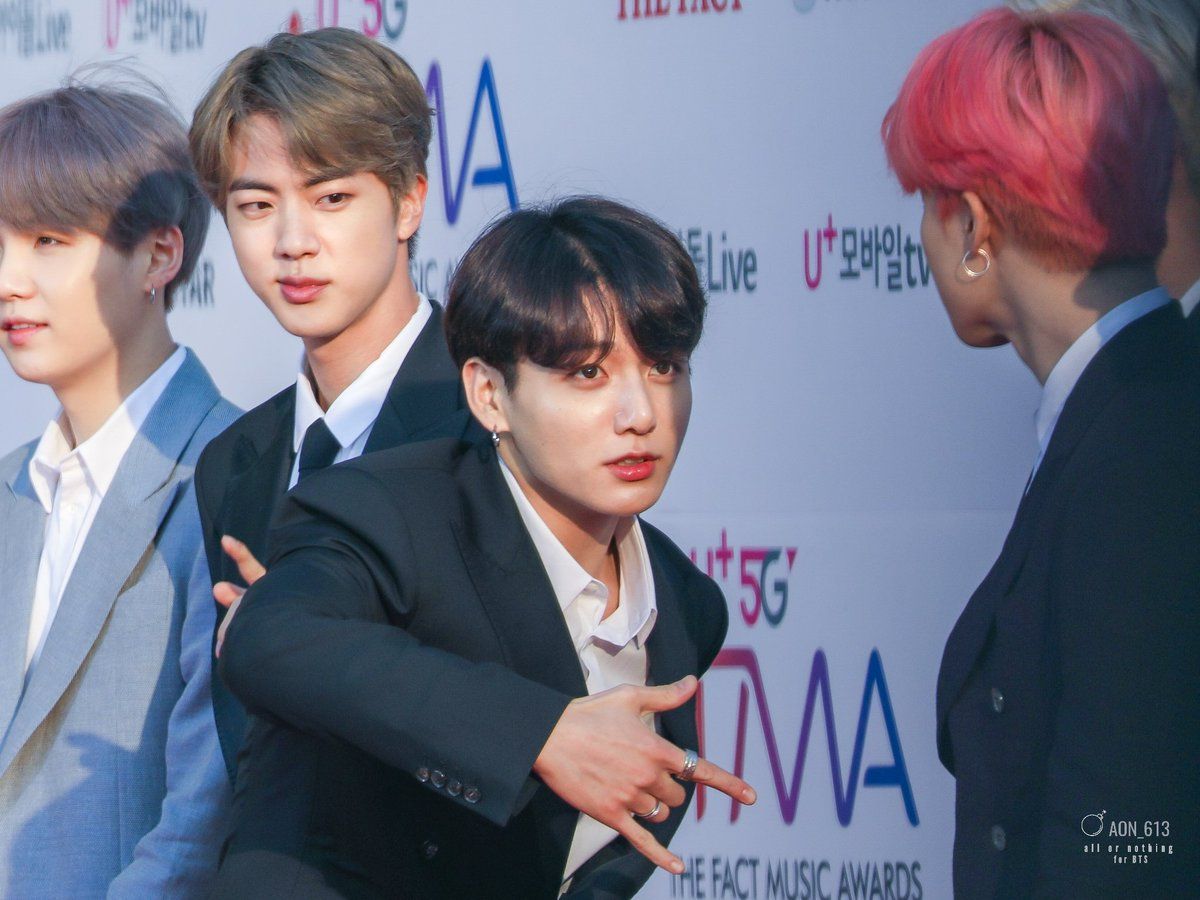 BTS member Jungkook sends an 'I love you' (Korean/American Sign Language) towards a tense Jimin on the red carpet (Fact Music Awards) in order to elicit a smile. (2019.)

Sometimes it is necessary to maintain a particular 'face' in order to not be nitpicked excessively, your every word dissected. In 'Persona', Namjoon raps, “Who am I? The question I had my whole life/The question which I probably won’t find an answer to my whole life/If I were answerable with a few more words/Then God wouldn’t have created all these various [facets of myself]. I'm still not so sure if I'm a dog or a pig or what else/But then other people come out and put the pearl necklace on me.” He continues later on, “Hey, have you already forgotten why you even started this? You were just digging it that someone was listening. Someone like me ain't good enough for music/Someone like me ain't good enough to be a muse/The flaws of mine that I know/Maybe that's all I've got really/The world is actually not interested in my clumsiness at all.” This fear and anxiety that plagues BTS leader Namjoon he characterizes as another 'face' of himself, and tries to reconcile the fact that as long as he's famous, he's going to be dealing with the conflict for a while. No split personalities found here; just a young man's confidence and uncertainty battling within. “Who the hell am I?” he wonders, and then answers himself that's he's all of these things at once: “The 'me' that I want myself to be/The 'me' that people want me to be/The 'me' that you love/And the 'me' that I create/The 'me' that's smiling/The me that's sometimes in tears/Vividly breathing each second and every moment even now.” They'd prefer you to carefully look back on every aspect of yourself and judge, but also begin to move forwards in life—minus all the emotional baggage. “Where's your soul?” he asks. “Where's your dream? Do you think you're alive?” Devil's advocate: being personally previously traumatized by various events does make them perfect candidates for MKUltra programming. But just because you're vulnerable doesn't mean someone will take advantage of you. It just means they can. It's important to protect yourself, they reinforce throughout their discography, espousing the importance of consent, a sense of self-worth and a fundamental sense of identity. Map of the Soul: 7 is, in one word, about identity, and focuses heavily on the 'Ego' part of Jungian philosophy and the importance of developing a healthy ego (positive life experiences, identity, world-view, dignity, self-worth and purpose.) While they haven't endorsed a certain political idea, their beliefs shine starkly through their lyrics and messages: criticism and skepticism of heavy government control, advocacy for free speech ('Speak Yourself'), amity and civility between people even if they disagree (bipartisan unity) and a distaste for violence. It's pretty accurate to say they believe people should be able to be and believe anything they want, without harming others. These values, along with their humility, love and kindness, endear them to fans all around the world. But be not distracted by my own heavily politically-focused coverage of the group. This is just where they stand on the issues, and they don't go around screaming their political stances to the world 24/7, either. If no one asks and it's not relevant to current events, one might deduce that on any given day the seven are simply a bunch of often-goofy bros who really like singing and dancing and rapping and making music. While that may be not as important and pertinent to world events, one would be amiss to say that this isn't a large part of why they are so popular.