With a blog like this, it's important to find a solid work to start off on. After all, first impressions matter, and in order to encourage more people to explore the creative side of the FediVerse, you have to demonstrate what is possible. Music is fantastic in this regard as even a few minutes can densely pack in so much meaning and effort. So when I noticed Uwe Hermann's channel on PeerTube, my interest was piqued.

And upon further inspection of his content, I was not at all disappointed.

Typically his videos consist of recordings of multiple percussion instruments being laid out in a tile-like fashion (see below) edited to form a full song. Songs covered range from standard grooves to full remixes of songs in the Creative Commons. 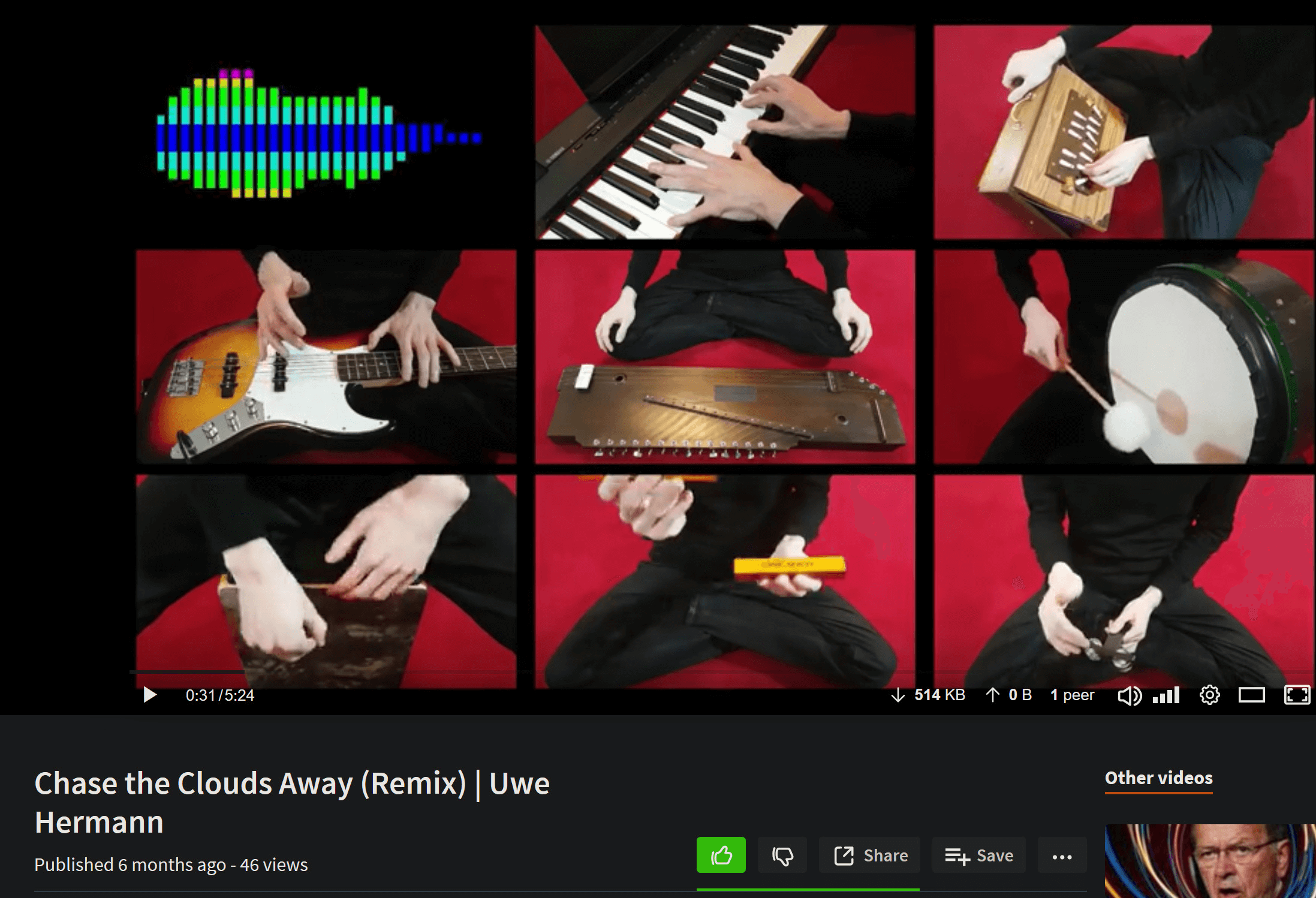 I generally record 1080p/60fps videos using a smartphone, with a Zoom H5 used as USB “soundcard”. Most of my editing is done on Linux using open-source software: e.g. Audacity for audio editing, Ardour for multi-track audio arrangement, and Kdenlive for video editing. As for the process in general, I usually start by playing around with various instruments until I find a nice set of patterns or rhythms I want to base the song on. Then I quickly record a draft version (audio only) of the patterns and try to make a rough audio arrangement in Ardour until I'm happy with the overall song and every individual track (4-12 usually) and how they fit together with the other tracks. The most time-consuming step is then actually recording the final version of the video (and at the same time audio) tracks. This usually requires quite a few “takes” to get a good run where video/lighting is OK, where audio quality is OK, where I'm actually playing the instruments with a usable timing and without errors etc. The process repeats for every single track/video of the song. I usually have a “click track” on a headphone while I'm playing each instrument, so that the timing between the different tracks is correct; I also add small hints to the “click track” for when I need to pause or change patterns for the respective instrument. After all videos are recorded I extract the audio tracks to individual WAV files, arrange and mix those in Ardour, and export the result as the final audio version. Similarly, all video tracks are arranged in Kdenlive. Intro, outro, transitions etc. are added as video effects, and the final audio file from Ardour is used here. When all is done, the resulting final video is rendered, which usually takes an hour or two, depending on how many tracks there are.

2. Are there any videos you wish you could do-over or regret making?

Not really. The first video is arguably the least “professional” one I made, but it was OK as a quick test of both the instrument (which I received on the same day I made the video) and the video editing process in general. I improved my video/audio/editing/timing/musical processes quite a bit for the next few videos (though it's all still far from perfect, of course; I'm not a professional musician, just a random dude on the Internet doing this in my spare time, just for fun).

Give it a go! It's a lot of fun to make your own little arrangements or songs, or to remix other (Creative Commons licensed) songs. You don't really necessarily need a lot of equipment or expensive software (a smartphone and some open-source software will do just fine). You don't even need to own or be able to play any instruments really, you can easily just arrange songs or remixes in Ardour by using other Creative Commons licensed audio files, e.g. from ccmixter.org or freesound.org or the like.

In addition to the featured channel, uwehermann can also be found on Mastodon, FunkWhale, and PixelFed.