A Letter to a Cyclist Friend – VA Creeper Trail

A Fall day and a reply to a friend gets written;

To S., a friend from Czech Republic, who like me is a Cyclist. A good correspondent, active collectionist of Slowly stamps, who I was fortunate to meet via the app.

This is an example of the letters we share, with pen pals all over the World, via the Slowly App. A modern day take in the traditional penpal experience.

The original didn't have the added pizzazz of imagery and the live links included in the Blog post. But the inspiration and most of the text in this page came directly from my Slowly Web client editor screen.

Sent on November 3rd, 2020 — Election Day in the USA, which got a brief mention in the final paragraph. With the hope it would bring Good News for all of us. Letter below was lightly edited to remove personal references and portions we don't want to share in public.

And the letter begins

Thank you for the letter and the very pretty photos. :) Enjoyed seeing them, as it's a region I have never visited and I am always curious to see how it is.

Also – I couldn't believe it but I found an old train tracks converted to a bike trail. Only 3,5km but a part of a larger trail system. Czech C&O Canal Trail...

This is neat! And a good start. Once one of those projects is done, it could inspire other people to do the same in their own regions, and to start pushing for it.

I visited a trail in Virginia, USA last year, in mid September – a famous one there, called the Virginia Creeper Trail. It's also a converted railway track right of way. And it was interesting to read some of its History in trail side panels. The project started in the early 70s, and from the locals pushing for it. The city of Abingdon bought the right of way for only $30,000 I believe (going by memory) and today it generates millions of dollars annually for the region with tourist visits and stays. 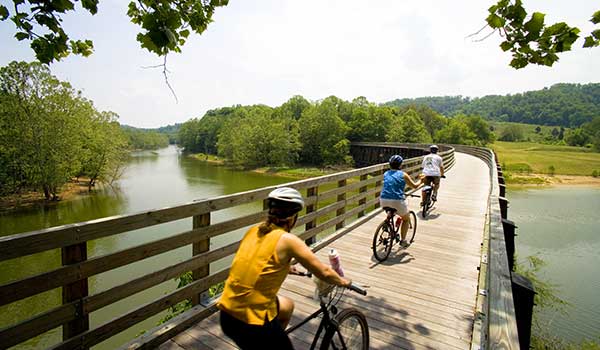 Wikipedia has a page for it . And there's also their official site .

The 'Creeper trail' name, I originally thought would come from the Virginia Creeper plant, which is common in the South of the US and quite invasive. But it's not the case – the train that used to run on this line was called the Creeper as it moved slowly up, from the low point in Abingdon to the end of the line in the North Carolina state line. This was a lumbering region, and the train brought lumber down to Abingdon, where it was processed by the saw mills.

I walked the initial few kilometres from the Abingdon end, and later saw it further down when spending a night in Damascus, Virginia. There are a number of old wooden trestles bridging the valleys, and wonderful views from them. They are preserved and in great condition. 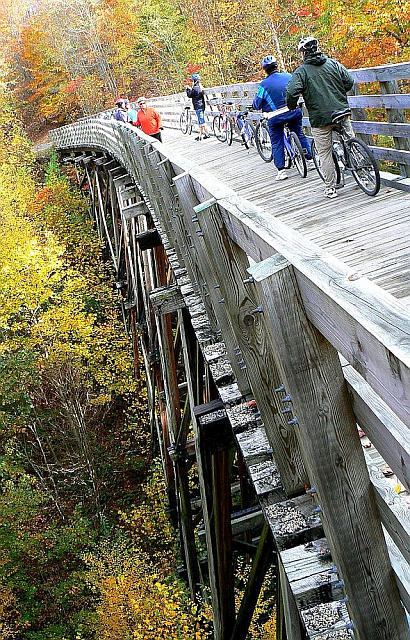 The trail is popular and even used by non-cyclists — as there's a long downhill section, people can enjoy riding bikes on it even if they are not in shape. Simply coasting down, from the White Top, VA end, near the North Carolina state line, towards Damascus and Abingdon, in Virginia. 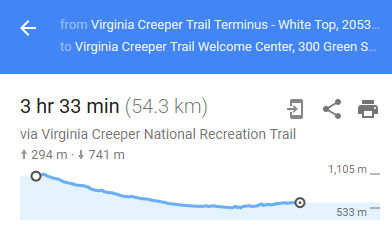 There are bike rental outfits that even have big vans, with trailers, and people can rent a bike from them, get a ride to the high end and coast down. So, it's busier with assorted people, not like C&O or the GAP trails, but has some similar interesting views, high wooden trestles crossing the valleys, forest all around.

Here's a nice Google Map showing the complete trail - from Abingdon, Virginia to the terminus at White Top, VA, very near the North Carolina state line. (and also White Top mountain, which gives the village its name)

One of those photos you shared reminded me of the GAP trail in Pennsylvania – the railway path, the high forest just next to it, and meandering without any human presence visible in most cases. :) thanks for sharing it! Here's a similar view :

The photos at the riverside in Prague are also cool – that furry little animal is so cute. :) Thanks for those too.

So are you watching TV news tonight to see the results of the American election? I think I will follow it on the BBC, with some occasional looks at CNN possibly, although they have all those commercials which can be tiresome. Hope things go well, would be wonderful if Biden has a strong vote, to avoid chicanery from Trump's side. Fingers crossed! :)