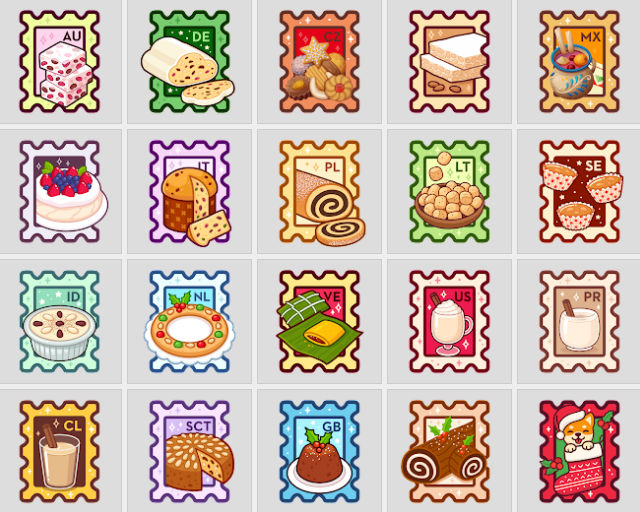 There was a large batch released early Wednesday

...and the pinging on my devices let me know they arrived. 1 am on my location, and now I just finished updating the Slowly Stamps WIKI, so I can post them here as well.

New stamps are first noticed like it happened here, their entry being added on the API is what tells us, serious collectors, that a new stamp is upcoming.

A total of 26 new stamps appeared, I could only insert 20 images in the original Reddit Topic, so will do the Premium Region-specific Christmas ones here. And the rest are in a second topic so it could include their images as well.

Not one of these are actually in their respective countries Stamp Stores yet, but they will appear sometime soon. We can have 'now available' posts for them when someone spots them in the wild. 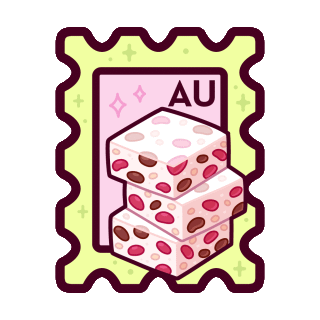 A slice of old fashioned White Christmas is as close as you’ll get to a white Christmas in Australia! This traditional slice is a must-have Christmas delight, the creamy white crackle studded with jewels of glace cherries and dried fruit is as pleasing to look at as it is to eat. 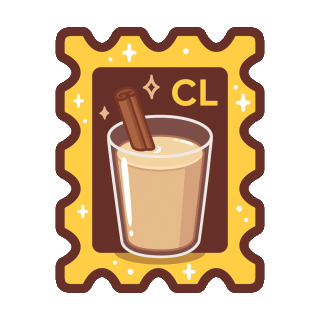 Cola de Mono, which translates into “monkey tail,” is a traditional Chilean holiday beverage. It is most commonly served during Chile's Christmas and New Year's celebrations paired with another cultural favorite, pan de Pascua, similar to an American fruit cake. The main ingredient is in Cola de Mono is milk, heated up and infused with warm, delicious spices and flavors like cinnamon, cloves, and coffee. 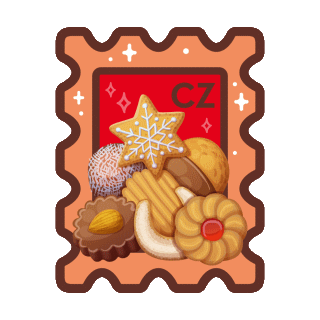 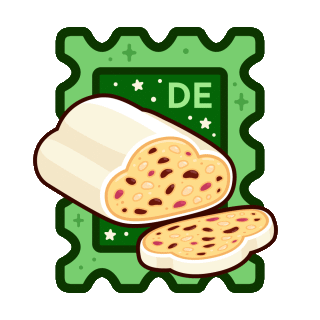 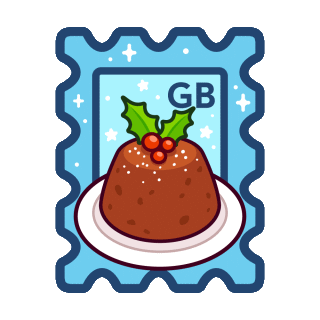 Christmas pudding is a staple dessert at every British Christmas dinner ever since its introduction by Prince Albert. Early versions contained meat such as beef or mutton, along with wine, onions, dried fruits, and warming spices. Today, Christmas pudding does not contain meat, but fruits, eggs, suet, molasses, and spices instead of it, and every family has their own recipe for this steamed treat. 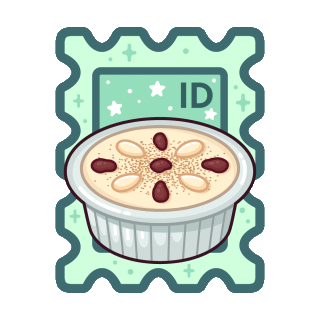 The classic Menado Klappertaart is a baked custard mixed with young coconut, raisins, and almonds. My mom's version uses a plain white loaf of bread with crème anglaise on the side. It's delicious and firmer than the Menado style, yet it still has a creamy texture, similar to bread pudding. 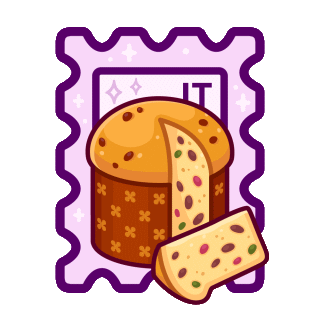 The traditional panettone recipe dates back to the fifteenth century, where legend has it that a distracted pastry chef dressed up a long-cured dough on the fly with candied fruit and raisins, just in time to serve his new invention to the Duke of Milano. Nowadays, it's not uncommon to find creative riffs on the classic recipe, ranging from chocolate chips to Italy's famed limoncello and beyond. Wrapped up in elegant paper and a bow, with each cake boasting a more unique flavor than the last, how can a food lover choose just one? 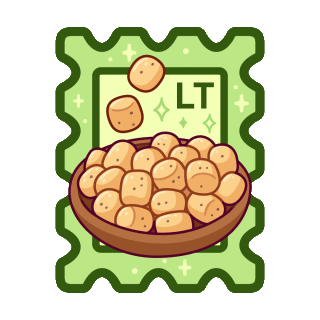 Kūčiukai also called Christmas cakes – is a traditional Lithuanian dish served on Kūčios, the traditional Christmas Eve dinner in Lithuania. They are small, slightly sweet pastries made from leavened dough and poppy seeds. There are variations in sweetness, it is usually eaten dry but can be served soaked in poppy milk or with cranberry kissel. 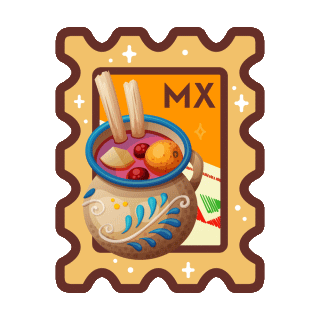 Christmas time in Mexico is a time to prepare the traditional Ponche Navideño/Christmas Punch. At family gatherings, some families will have a large pot simmering on top of the stove with that sweet liquid full of fruits, while the aromas of cinnamon and citrus fruits float in the air. 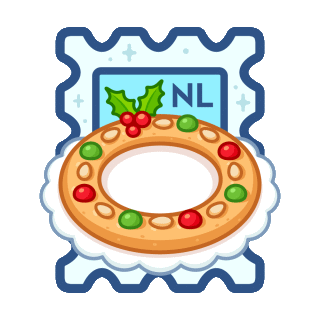 Kerstkrans – a wreath shaped pastry topped with glace fruits and filled with almond paste. Kerststol – A fruited Dutch Christmas loaf, sometimes with a sweet almond paste center. Marzipan. Oliebollen – fried balls of batter, what some say could be the Dutch precursor to the donut. 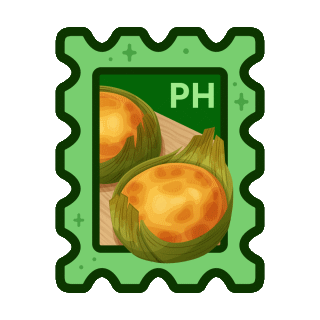 Bibingka is an umbrella term for the traditional (and beloved) cakes that are made with coconut milk and rice flour. If you were to travel from region to region in the Philippines, you would probably be surprised at how many kinds of bibingka there are, from ultra-sweet sticky rice cakes, to those dotted with savory cheese or salted egg. 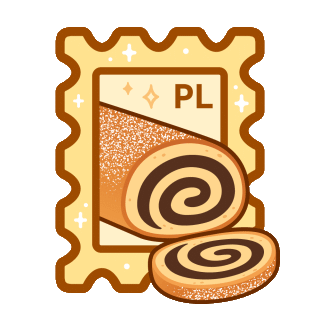 Makowiec is the Polish name for poppy seed roll, a traditional cake where poppy seed paste is placed between layers of dough. Raisins, almonds, honey, and orange peel can be added to the cake in order to enhance its flavors. 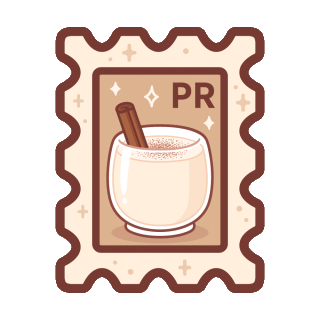 Coquito is a traditional coconut punch served at Christmas and New Year's celebrations in Puerto Rico. The creamy, sweet drink is similar to eggnog with rum but with the tropical element of coconut. Caroling groups stroll to visit friends and are happy to be greeted with a coquito. 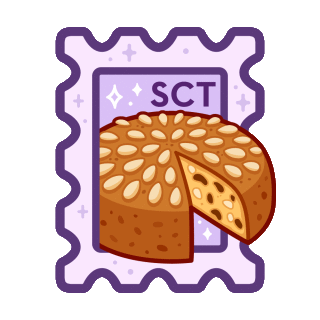 Dundee Cake is a rich Scottish fruitcake made with currants, raisins and almonds; many recipes will also include marmalade and fruit peel. Like many Scottish recipes, it's been known to have a dash of whisky as well. 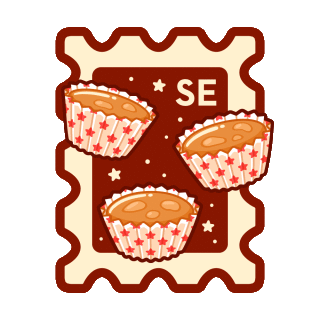 Knäck is a Swedish toffee prepared with caramelized sugar and butter or heavy cream. It is often additionally sweetened with syrups and may be enriched with various chopped nuts. The caramelized mixture is usually left to set in miniature paper molds, or it can be cut into bite-sized pieces. The name of this Christmas staple name translates as crack or break, referring to the typically crispy texture of toffee.

And the remaining two... 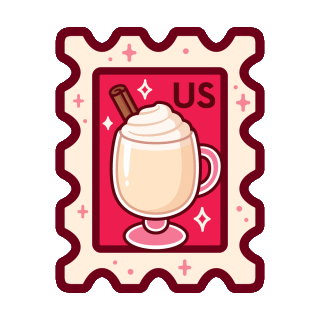 Eggnog, historically also known as a milk punch or an egg milk punch when alcoholic beverages are added, is a rich, chilled, sweetened, dairy-based beverage. It is traditionally made with milk, cream, sugar, whipped egg whites, and egg yolks. 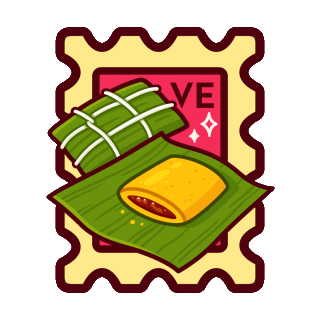 Hallaca is a tamal from Venezuela. It consists of corn dough stuffed with a stew of beef, pork, or chicken and other ingredients such as raisins, capers, and olives. Hallacas are folded in plantain leaves, tied with strings, and boiled; The dish is traditionally served during the Christmas season and has several regional variants

Plus, three stamps without Country Codes ? 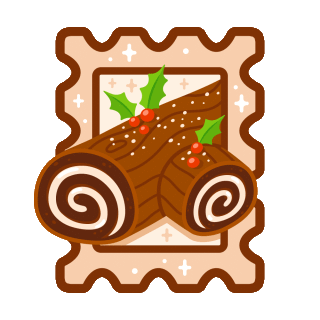 Buche de Noel is the French name for a Christmas cake shaped like a log. This one is a heavenly flourless chocolate cake rolled with chocolate whipped cream. Traditionally, Buche de Noel is decorated with confectioners' sugar to resemble snow on a Yule log. 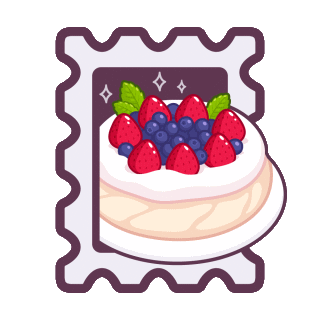 Pavlova is a traditional dessert in New Zealand, and Australia claims it as well. It is a meringue base that is filled with whipped cream and usually kiwifruit. Children's birthday cakes are often pavlovas in New Zealand and may be decorated with candy. 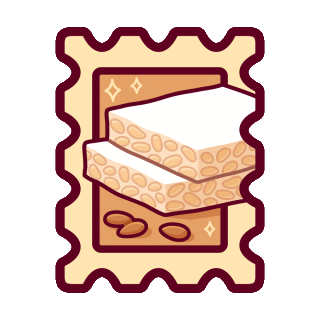 Turrón, or torrone, is a southern European nougat confection, typically made of honey, sugar, and egg white, with toasted almonds or other nuts, and usually shaped into either a rectangular tablet or a round cake.

We think those are Premium singles, and should sell for the usual 50 Coins each, in their respective countries Stamp Stores.

We are speculating these stamps might, or might not, show up in the popular Time Machine feature on the Stamp Stores, Globally. However, we don't know for sure.

Based on past practice, we imagine these will be available in certain countries only, at the 50 coins price. After the release window ends, they could either disappear all together, or be added to Time Machine.

If it ends up there, the whole batch would cost only 500 Coins (10 CAD, half price). But, we take a risk of missing the chance to purchase if they do not appear on TM.

Time Machine is also popular as it offers international stamps without the need to use 'black magic' and mock location tricks, which are a grey area as the company could lash back and qualify that as abuse of their Terms of Service. (always worth mentioning)

What do you think of those new Christmas stamps?

Share your opinions on the Reddit topic, here. I suggested to a good friend that maybe we could prepare a big post with Recipes of the xmas treats shown in each stamp, and publish them all together.

Anyone interested in volunteering for this project? I could produce a finished Blog post – in two parts, maybe, 10 stamps and recipes in each to keep the size manageable. Edit : Done. I found information and recipes for all 20 Christmas goodies shown in these stamps. Bon Appetit ! 🙂🌟✨