SLOWLY – read and write, on phone or laptop? 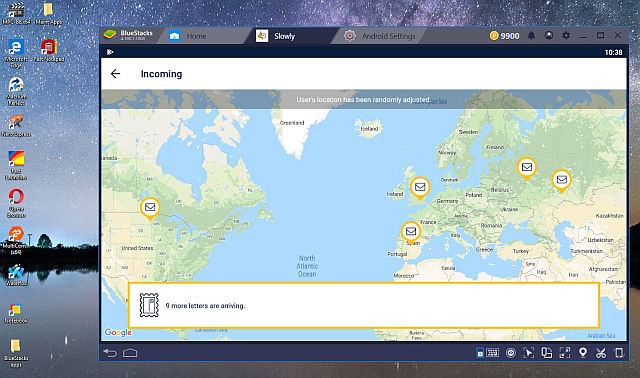 A common discussion theme between users

Do you write letters on your phone or your laptop?

I for the life of me cannot type on my phone for a long letter, and need a more comfortable physical keyboard. Though, one of my pen pals will write 3-4k word letters on their phone.

Also, on the computer, it's nice to see the previous letter you're responding to while you type, don't you think?

SLOWLY on a laptop or PC – Are you new to this?

A beginner's guide also exists, this post is a newer and enhanced version for more experienced users. But you can see another Blog post which has all the info and details to get you started, HERE.

Glad this topic is being discussed again

A new topic was posted in our subReddit for Slowly app users, by /u/hojorva on Nov 1, 2022. I responded with a long comment, and many other users also participated.

The quote on the first block above is the complete original post text. And many more responses followed.

I have a clear preference:

It naturally makes sense to use the most comfortable and productive device we can, for long reading and writing sessions.

For me, that is a real computer – a laptop, specially, or a desktop PC. The mobile devices are much less productive; and that is not only for me, but can be confirmed by any serious study of ergonomics, productivity, etc.

One of the first serious posts I made here in our subReddit, back in May 2020, was a topic regarding how to setup the Web Client for Slowly.

That was based on notes I shared with my own pen pals, as the instructions provided by Slowly on their Help site were short, terse and unhelpful for many people.

Almost 3 years later and that post is one of the most popular on my Blog.

I find it puzzling and counter productive that the Slowly development is focused on mobile clients most of the time. The result?

What we currently see: many people who simply find the app on a mobile app store, barge in, make some low effort attempts and soon leave, unannounced. (this also causes grief for anyone who attempted to engage them in correspondence, as many user comments recently attest)

To me, the Web Client should be priority one, as the real writing and reading needs the best tools we can afford – a larger screen, a responsive keyboard.

Those are not to be found on mobile devices. Maybe a good iPad with an auxiliary keyboard? but that is already bordering on a mini laptop, and the cost might be even higher than a simpler, older laptop which can run Slowly Web Client quite well.

But thankfully they did create the Web Client!

The original, first version of SLOWLY for iOS appeared in February, 2017 – so 5 and a half years ago. An Android version followed in May of 2018, which was clearly needed as Android is the largest market in terms of user numbers.

Since mid 2017, people were requesting a 'Web Client' version; Letter reading and writing is pretty intensive work, it's content creation, and we need the most productive device we can have to do it.

It took a little longer, but the team delivered – in mid September, 2019, the official SLOWLY Web Client was released.

Not everyone can afford to have a PC or laptop

For many users in less developed regions of our world, the mobile device might be their sole computing platform or internet access point.

In my own region, North America, computers are so abundant that getting a simple, used, older computer is easy and very affordable. A user could get a machine which can run Slowly Web Client and many other tasks well, starting at about 50 US dollars. In Europe prices are a bit higher.

But this is not the reality in India, or Africa, for example – once I read a statistic saying that the majority of users there only have one single device, a mobile phone. For these users, the mobile versions are their only option, and we have to acknowledge and accept that reality.

The current Web Client is a bit puzzling – since while it is eons ahead of the mobile clients in terms of ergonomics and productivity, it still lacks some of the mobile versions functions:

On the other hand, the Web Client on a PC offers things that make it far superior (for letter reading, writing) to mobile versions – not only because of the better hardware it is running on.

For example, it displays the text of the letter you are responding to, while you are composing your response – which is really useful. 👍🙂

Best of both worlds?

I have a solution to the missing features, which is the one I first used way back in 2019. Before the official Web Client was out, it was clear to me I needed a better way, my letters were already long and took much time and effort to type in a mobile screen.

Running the Android Slowly client in a Android 'emulator' in a Windows machine was the solution I found.

For many months after that, I used it happily. Even after the official Web Client came out, I was used to and preferred my Android virtual machine solution.

With the arrival of Windows 11, an Android app subsystem is already built in – and I have friends who happily run the SLOWLY android versions on it.

This article on PC Magazine has the info on how to get this up and running. 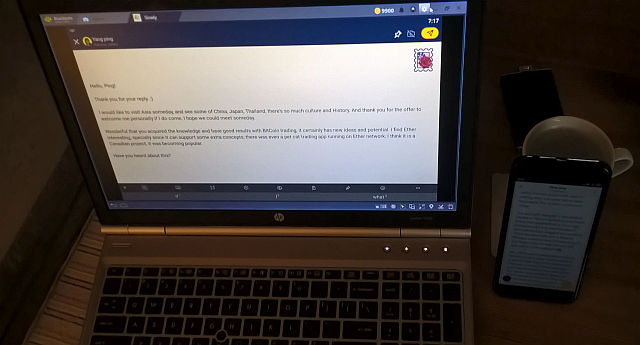 A solution for all Windows users?

Or Mac users as well. We can use a 'virtual Android Machine', which can support different Windows versions and Macs as well.

The screenshot above shows my power user setup, circa July 2019 – with my laptop running BlueStacks, SLOWLY android version 5.xx in Tablet mode, full screen, while my phone at the side showed me the text of the letter I was replying to. 😎👍

I wrote a detailed post here which shows my configuration for a basic Android machine. I recommended MEmu, and still do – it's the best, lightest tool for this job I have seen so far.

It can also run in Tablet Mode – so you could have a nice, full screen Android SLOWLY client and all the extra features the mobile versions include.